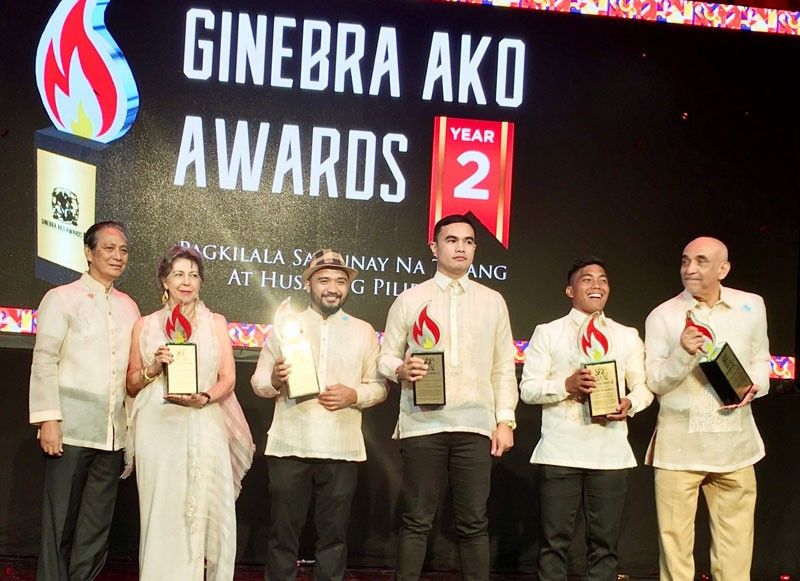 A nationwide search drew nominations for five categories, which then went through screening and preliminary judging before shortlists of three finalists per category were evaluated by the board of judges, namely Mac Orendain, professor at the University of Makati; Winston Santiago, CCP director for Marketing and Mulanay Experiential Inc. president; Nadia Abcede and Paulo Tupaz of Ginebra San Mguel Inc., and this writer.

The following awardees were selected.

Aris Wilamere A. Villaester for Ginebra Ako Para sa Paglilingkod. The 33-year-old warden of Tagaytay City Jail under the Bureau of Jail Management and Penology created the “Sponsor a Release Program” that sells artworks created by PDLs (Persons Deprived of Liberty) to pay for their respective fines and support them after their release. A re-bargaining is conducted for PDLs with records of good behavior, so that they could be released early with a P10,000 fine.

Villaester became known for his unorthodox methods in improving management of the Tagaytay City Jail. Initially facing criticism and doubt when tasked to supervise one of the most notorious city jails in the BJMP, he established trust and respect involving both the PDLs and the jail officers. He also focused on personal improvement of the PDLs, treating them with dignity in his day-to-day activities as warden.

Rey S. Buhi for Ginebra Ako Para sa Kabataan. The executive director of “The Storytelling Project (TSP)” that he co-founded with his wife, Buhi was an employee volunteer for ten years at SMART Communications Inc.’s “Read-to-Be-Smart” program. He left his job in 2015 to build up a fledgling organization for nationwide reach.

He has given storytelling workshops for more than 5,000 volunteer students and teachers and has reached more than 20,000 kids from Camiguin Norte, Babuyan Islands to Patikul, Sulu. Recognizing that high dropout rates in rural schools was due to lack of interest among children in low-income families, Buhi led TSP in converting non-readers and frustrated readers into active volunteer readers through a 21-day reading immersion program.

Developed and evaluated by reading specialists at the UPLB Family Development Research Center, its framework focused on attitude to reading, confidence about reading, reading behavior, and sharing enjoyment of reading. TSP also highlighted learning through experience, by having the kids go through role-playing activities such as selling goods in the palengke, cooking healthy food, and managing their own savings accounts.

Illac Angelo A. Diaz for Ginebra Ako Para sa Kalikasan. The 47-year-old founder and executive director of Liter of Light Global Foundation graduated from MIT. With his background in urban planning, he has spent 10 years in alternative construction and six years in supervising Liter of Light, which has become a global foundation with operations in India, Kenya, Brazil, Egypt and other countries.

It creates solar lights for night, as well as flashlights, lamps, and streetlights made from simple materials. Lights are bought or made by clients, donors and volunteers and sold to members of communities for rent and use within the village. They are also sponsored and given to communities affected by disaster.

Diaz advocates community-based solar lighting. He stresses: “Solar can be on a sari-sari store level.” He hopes to create an encyclopedia for climate resilient communities, and dreams of setting up a Nationwide Emergency Lighting System.

Lito Ramirez for Ginebra Ako Para sa Palakasan. Orphaned at six years old, he started playing rugby at 14 in the Don Bosco Orphanage, becoming the first homegrown rugby player in the country with his acceptance to the national rugby team at age 17. He represented the Philippines in the 2015 Olympics qualifiers. The 24-year-old currently works with Santos Knight Frank for their rugby program, plays and coaches for the Makati Mavericks, and helps handle a development league involving 90 kids in Muntinlupa.

Pedro R. Abraham Jr. for Ginebra Ako Para sa Entablado. “Edru” founded the Kontemporaryong Gamelan Pilipino (Kontra-Gapi) as the resident ethnic group for dance and music for UP Diliman and Commission on Human Rights. He is president of the UP Concert Chorus.

In 35 years of service in theater, music and dance, Abraham has passionately shared his devotion to indigenous people. His work is instantly recognized when audiences realize that what he offers is something rare and necessary. He says that his main challenge is how to present his art form to the world.

The awardees each received a trophy, a certificate of recognition and P100,000. Emceed by RJ Ledesma and Pia Wurtzbach, the program had Allen P. Mercado and Ronald C. Molina leading Ginebra San Miguel officials in presenting the awards. They were assisted by the “Living Legend,” former Ginebra playing coach Robert “Sonny” Jaworski, current Ginebra sparkplug Scottie Thompson, Gidget Velez, and Quest, who also entertained the audience with musical numbers.

In his concluding remarks, former Senator Jaworski commended the Ginebra Ako program for providing an avenue of discovery for Filipinos of remarkable worth. He also expressed the hope that it will continue as a model of inspirational public service.